Colombo has no shortage of Chinese restaurants, most of which serve food with its own particular character, shaped, of course, by local tastes (meaning, it’s much spicier than the run of the mill storefront Chinese in New York or any western city for that matter).  It’s also probably nothing like the ‘authentic’ Chinese food you get in China. That’s why Juchunyuan is such a find: It’s a Chinese restaurant in the heart of Colombo that obviously caters to a largely Chinese clientele looking for a true taste of home.

You could call this well-worn establishment a hole-in-the-wall because it’s off the eaten path, but a clean one at that exuding an odd charm. Though not heavy on ambience, the downstairs dining room, with its 4 semi-private booths, is at least spotless and cooled by AC. While upstairs offers additional seating, both times I have been there it was empty (which might have something to do with the waitresses not wanting to carry the large chafing dishes of hot soup up the stairs).

Besides the paucity of décor, the first thing you notice upon sitting down is the gas burner built right into the center of your table, definitely an omen of good things to come. Also of interest is the single-page, double-sided menu that flashes Chinese characters at you (another good sign), but fret not as closer examination reveals tiny English subtitles written beneath. And anyway, didn’t you always want to know how to write “pig’s heart” or “sheep’s stomach” in Mandarin? 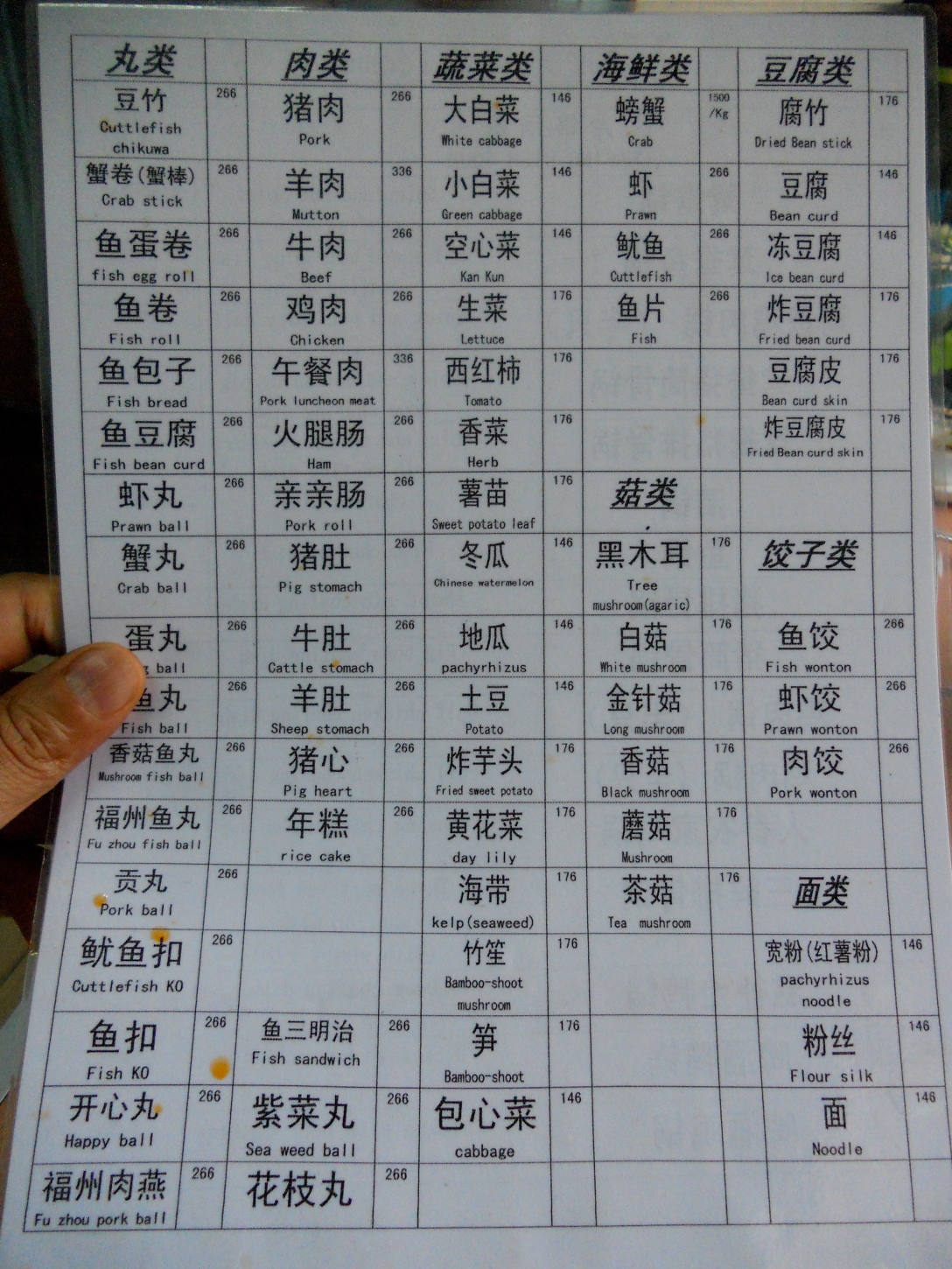 Once again, don’t be intimidated by the menu, because at least one of the waitresses speaks passable English and she will help you out with ordering.

“So how do we do this?” I shamelessly blurted. I might be a gastronaut, but never professed to being a know-it-all.

Our helpful waitress, Lena, directed our attention to the other side of the menu, which lists the different kinds of soup available. They’ve got fish, chicken, “pig bone” and even duck with beer among the offerings. You can order it spicy or not. We settled on the “three sort sea food with short rib soup,” extra spicy, of course.

Soup is not only the starter here, but the star, as well as the medium in which you will cook your meal. That’s right; if you thought the chef was going to do all the work, guess again. This is, after all, not just any restaurant, but  a “Resraurant” as the sign proclaims.

The flip side of the menu features a dizzying array of ingredients. In addition to the afore-mentioned offal, they also have more normal stuff like prawns, cuttlefish, beef, mutton, and vegetables such as mushrooms, kelp, cabbage and kan kun.

“We’ll have an order of those.”

I also got up to peek at the table next door, filled with a group of Japanese men happily swilling cold beers with their hot soup, and decided on getting some prawns, white cabbage, kan kun, and noodles.

“That should be enough for now.” I said, thinking about the “three sort seafood and short rib” that came with the soup.

Lena disappeared and reemerged with our utensils, an array of tools fit for us budding soup chefs, which included a tiny soup bowl and porcelain soup spoon, two metal serving spoons, one with holes; a fork; and a set of chopsticks. She flitted back and forth behind the scenes, returning with a delectable assortment of condiments—fresh chopped garlic and cilantro, peanut sauce, soy sauce, and a thick chili oil.

“Wow! This is getting more interesting by the minute,” I said to my cousin Cane, who had turned me onto this place, though he had only eaten some fried rice on his initial visit. Cane was visibly excited because like most Sri Lankans, this was an entirely new dining experience for him.

Lena appeared next with a large stainless steel bowl of soup, whose broth was practically bright red from the preponderance of chilies. It’s good to see that extra spicy meant exactly that. She rested it on the gas burner in the center of the table, and turned on the flame. Then the stuff we ordered started appearing on the table in quick succession, raw, of course.  Our mouths sufficiently watering by now, we wasted no time, sliding a couple jumbo prawns (with head and tail intact) into the mix along with whole leaves of white cabbage, some freshly made prawn wontons, and kan kun  (stems and all).

While this stuff quickly cooked in the bubbling cauldron, it was time to assemble our bowls of soup. First in went the pre-cooked rice noodles, over which I ladled several spoonfuls of the spicy broth. Next I added a bit of all of the condiments, and finally some of the now cooked vegetables, wontons and a rosy red prawn. I gave it a little stir and sipped a spoonful of the broth.

“Wow! Flavor” I said as both mine and Cane’s eyes seemed to light up at the same time.

The broth alone was something worth writing home about with its three kinds of seafood and pork ribs. We found out after the meal that the seafood in question was actually dried squid, oysters, and mussels, which had been imported from China, according to Lena. As far as I knew, you couldn’t get this kind of stuff in Colombo.

More raw ingredients went into the broth and fished out cooked into our bowls. After much slurping and chewing it seemed like we actually made a small dent in the huge chafing dish of soup. But this was clearly a meal fit for a minimum of four people.

So we went away happy and satisfied with our taste buds thoroughly titillated, and resolved to bring the rest of Cane’s family to help us conquer the next bowl of soup (and next time we did go for the pig’s heart and cow’s stomach).  Juchunyuan proved itself a marvelous and surprising find in the middle of Colombo, and if you ever find yourself with curry-fatigue, it’s got just the tonic for you.

450 B Charles Drive (off Duplication Road)