While California grows much of the produce we consume in the U.S., the Bay Area (i.e. Oakland, San Francisco) in particular is a food mecca. What might be considered trendy elsewhere–terms like, ‘organic,’ ‘sustainable,’ and ‘seasonal’–is really taken to heart here because people take their eating very seriously. Due to a dearth of Sri Lankan restaurants on the left coast, I knew I had to represent fully–especially in the Bay–so I planned two events here, a book party and a Sri Lankan supper club.

The book party was held at my new favorite restaurant in Oakland–Burma Superstar. I would never have heard of the place if not for my friend Gigi in New York, whose sister Tiyo is manager of the Superstar franchise. I believe they have 3 locations in SF proper, one in Oakland and, one in Alameda. When I was discussing plans for my book party with Tiyo, she advised me to have it at the Oakland location, their flagship restaurant. No problems there, for as many times as I’ve been out to SF, I never made it across the Bay Bridge to Oakland. At long last, here was my chance. After all, the way people in the Bay area explain it, Oakland is to SF as Brooklyn is to Manhattan. Being a long-time Brooklyn resident, I looked forward to checking out her sister city, long known for Raiders and Panthers. I was ready to leave my own mark on Oaktown with a little rice and curry.

I did not make anything fancy for the book party–simply a selection of Sri Lankan “short-eats” or small bites including fish cutlets, turkey patties, and devilled pork. For one, I did not have much time to cook, and secondly, I did not want to eat too much of my food, so that I would be able to try some Burmese food after the party. Thanks goes out to Tiyo, who came and picked me up in San Francisco, took me to Oakland to shop for my ingredients, and then donned an apron and helped me all day in the kitchen. I have not cooked in too many commercial kitchens, and it was a pleasure to use the woks at Burma Superstar, where they have a lot of time-saving equipment such as a serious deep-fryer to cook the cutlets.

It was an eclectic crowd–including a lot of musicians–that showed up to try some Sri Lankan food at a Burmese restaurant run by an Ethiopian. Call it true fusion, in every sense of the word–if ‘fusion’ applies to my music, then why shouldn’t it apply to food? Shouts out to Dub Gabriel, Sean Leonard, and Dan The Automator (producer of Dr. Octogon and Gorillaz). Also big up Tamara Palmer, a former music writer, who now writes about food.

Of course, the restaurant was in full blaze during the time of the book party making things feel even more festive. As soon as the event officially ‘ended’ at 8pm, myself and a party of 9 friends took over a long table in the corner to enjoy some amazing Burmese food. But that’s a whole different blog post (coming soon!).

Following a late night in Oakland, there was no rest for the weary as I had to make the move to Napa Valley to prepare for my next event–The Sonoma Sri Lankan Supper Club, hosted by my college buddy Graham and his lovely wife Sarah. Within the heart of wine country, Sonoma is known to be beautiful, but you just never know how beautiful until you see it yourself. My friend’s house overlooks the valley from a high hill, and so mesmerized was I by the view that I had to keep pinching myself to believe that it was real.

I couldn’t have come up with a better place to host the Supper Club if I was a location scout, and after shopping for fresh produce and meats in the quaint town of Sonoma, I set about preparing for the huge feast I was about to throw down. I marinated the pork, for black pork curry, and also made the dessert, caramel pudding or flan, which needs several hours of refrigeration in order to set. The next day, I started on all the other dishes which included rice, dhal, shrimp varauval, tempered leeks, carrot curry, mallun, and a Sri Lankan salad.

I started cooking at about 9:30 on the morning of the dinner and worked right through the day until the first guests started arriving about 7pm. By then, I was on my last dish, mallun, which is pretty quick to prepare. After serving the fish cutlets as an appetizer and delivering some introductory remarks to the crowd of about 20, I laid out the buffet and the guests filled up their plates with a meal that hardly anyone in the house had eaten before. 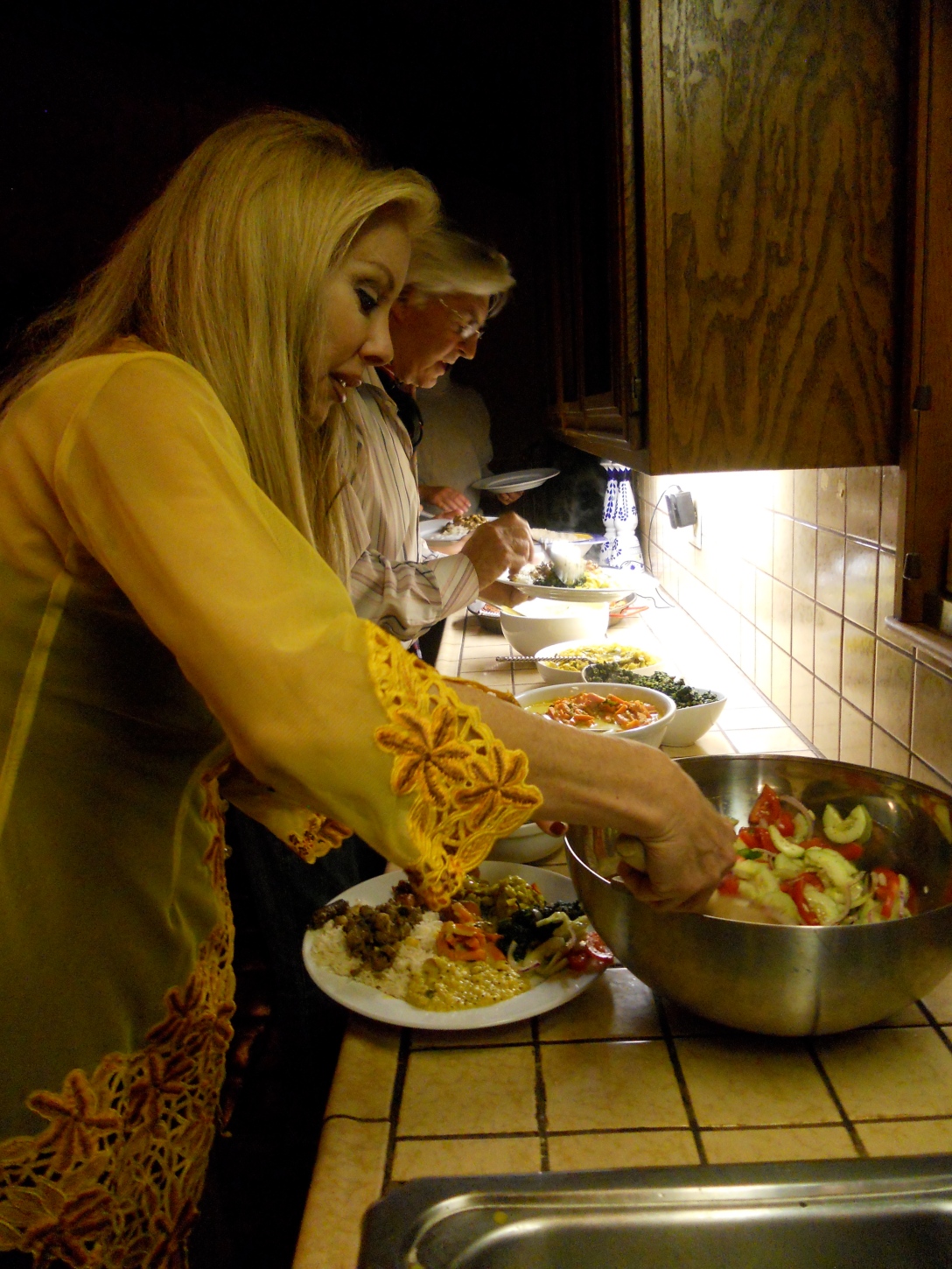 Graham had done his research pairing wines with the spicy Sri Lankan food, and I believe over 40 bottles of wine were consumed that evening. I got so many great comments about the food and people genuinely seemed to enjoy themselves. Of course, it wouldn’t be California without some of the guests heading outside for a late night dip in the hot tub. Not me, however. After being on my feet all day, I was ready for bed.

And, as if my west coast food odyssey was not over, my friends Dave & Holly Tambling took me out to a very special meal at The French Laundry in Yountville, CA, to cap a week of serious feasting!

Thanks to Graham & Sara, Dave & Holly, Gabe & Kelly, Sean, Tom, and Tiyo for making my west coast excursion a very  memorable one!