The ancient citadel of Machu Picchu, located high up in the Andes Mountains, has long been on my list of “must see” places on the planet, and I was finally able to fulfill this dream this past March, climbing both Machu Picchu and the lesser known Huayna Picchu (the rounded peak in the background of many classic Machu Picchu shots). But no matter how many photos you have seen of this popular site, it cannot compare to the experience of actually being there, surrounded by cloud covered peaks; breathing in the thin, crisp air; and being awestruck at the huge scale of the ruins and what it must have taken to build them in such a challenging location.

Of course, one of the main attractions of any trip abroad for me, is the food. Having never visited Peru before, I had no idea what to expect other than great ceviche and, of course, cuy or guinea pig. Arriving early in the morning in Lima, one of the first bites I had, however, was the familiar empanada–ground meat wrapped up in a pastry. So many cultures worldwide have something similar: In Jamaica and Sri Lanka, they call them “patties,” in Brasil, salgados.  In Peru, empanadas are as ubiquitous as Manhattan’s dirty water hot dogs, stuffed with all kinds of fillings from ham & cheese, to beef, chicken, as well as an amazing sweet variety made with guava and cheese.

Judging by the hotels in which I stayed, breakfast is not much of a meal in Peru. The most you’ll get is a white roll with butter and jam and maybe some fruit along with a concentrated coffee liquid to which you add hot milk. To see what average Peruvians start the day of with, however, I took a look at what’s cooking on the streets. Outside one of Lima’s old school mercados (markets), where you can by all manner of fresh meats and produce, I followed the noise of frying and the aroma of meat and eggs, to discover what’s really for breakfast here. 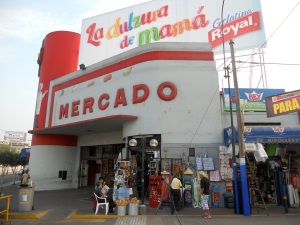 Speaking of the mercado, it’s a great place to get a “lay of the land” and see which foods are available in a country as well as which foods people like to eat. In Peru, where the mighty Amazon begins, there are no shortage of exotic eats, many  of which I am still trying to at least put a name to.

The meat section reminds me of a typical market in Sri Lanka (or any developing nation for that matter), where huge sides of beef hang on hooks sans refrigeration. As people waste  no part of the animal, plenty of offal (the nasty bits) is available as well, to be made into traditional dishes like cau-cau, or cow’s stomach (which I did not have the pleasure of trying this time around) .

In Lima, ceviche is king, and I tried all manner of this seafood-cooked-in-citrus specialty, from the 5 soles plate at the mercado to the more high-end offering at La Rosa Nautica Restaurant (see earlier blog post). What I love about ceviche here is that they serve it with so many sides–a boiled sweet potato, toasted corn kernals, rice, and even fried calamari–which make it a full meal, while also providing a textural counterpoint for the tender chunks of fish and seafood. I also love the marinating liquid–leche de tigre (milk of the tiger)–made of lime juice, cilantro, red onions, and salt. 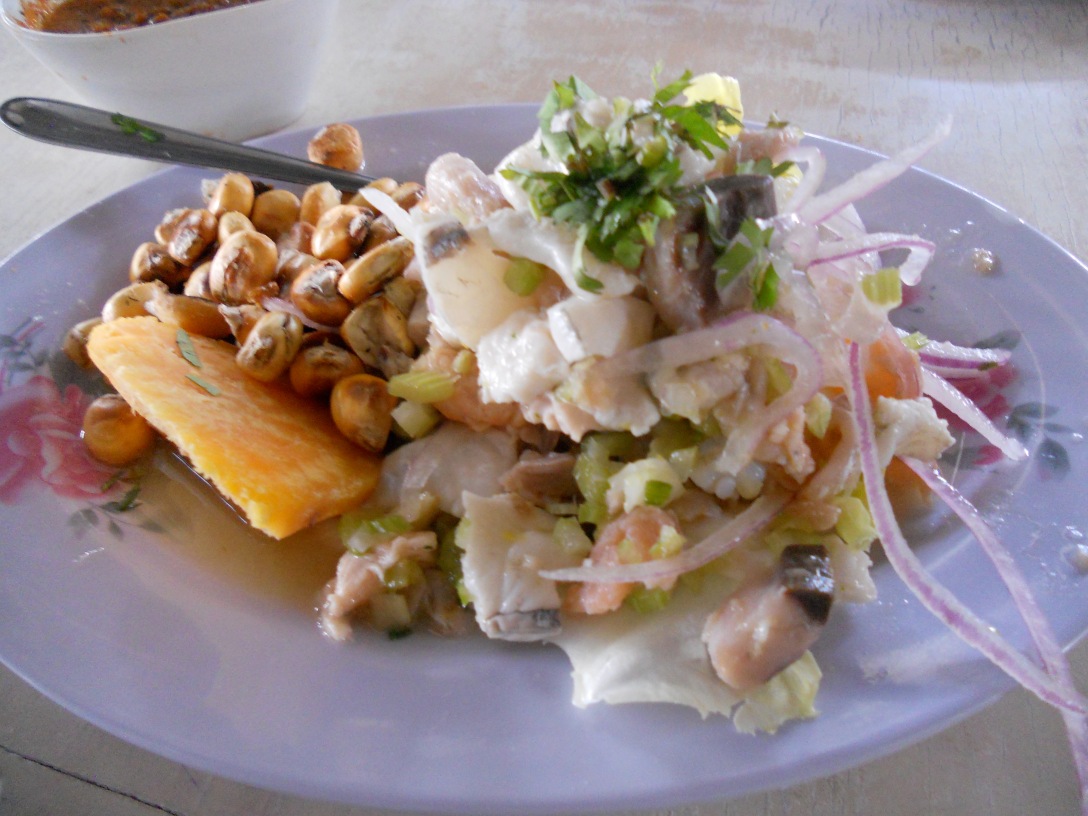 But while seafood is primarily the province of coastal areas, a plate of lomo saltado stands as more a contender for the national dish. A simple stir fry of (usually) beef with onions tomatoes and peas served with rice and french fries, lomo is a gut-buster that is guaranteed to keep you going all day (that is, if you are not inclined to take a nap after eating it).

Of course, if beef is not your thing, there’s plenty of pork and chicken to go around, and for those on the more adventurous side, alpaca (a relative of the llama) provides a great lean alternative. With a taste akin to beef, alpaca, prized for its soft fur, which is used to make everything from sweaters to rugs, also makes a mean steak.

Another quintessentially Peruvian favorite is, of course, guinea pig or cuy. Though Americans might balk at the idea of eating an animal that many consider a household pet like dogs and cats, Peruvians also keep these animals as pets, yet relish their taste, regardless. No self-respecting gastronaut, could bypass such an opportunity, so I seized the cuy with both hands at a restaurant catering to locals in Cusco, the former Inca capital. Located almost 12,000 feet above sea level, Cusco has a decidedly rootsier feel compared to more cosmopolitan Lima. It’s also difficult to breathe here, and handful of coca leaves placed between the cheek and gums and alternately chewed and sucked on greatly helps deal with it. It doesn’t seem to bother the locals, however, mostly quechua-speaking Indians, who appear out of a different era.

The grilled guinea pig was served whole (or actually vivisected from head to tail) along with some pasta, sauteed vegetables, and a couple of large Andean potatoes. The crispy skin, much like chicken skin, was delicious and comprised most of the edible material here as this small animal does not have that much meat (and a lot of bones). In fact, what little flesh there was tasted a lot like chicken except for the ‘head cheese’ up in the well-baked cranial cavity which had its own unique flavor. I thought nothing of polishing off the little critter except when I stared at its tiny, rat-like claws, which elicited unwelcome visions of the New York subway. At 20 soles (about $7.50), cuy was also no bargain in comparison to other local food, so I didn’t have it again on the trip. However, I did see a much cheaper version of cuy at a street fair Cusco, served with bread, cheese, and topped with a kind of seaweed of all things, but having just polished off a hefty portion of lomo saltado, my appetite was satiated for the rest of the day. 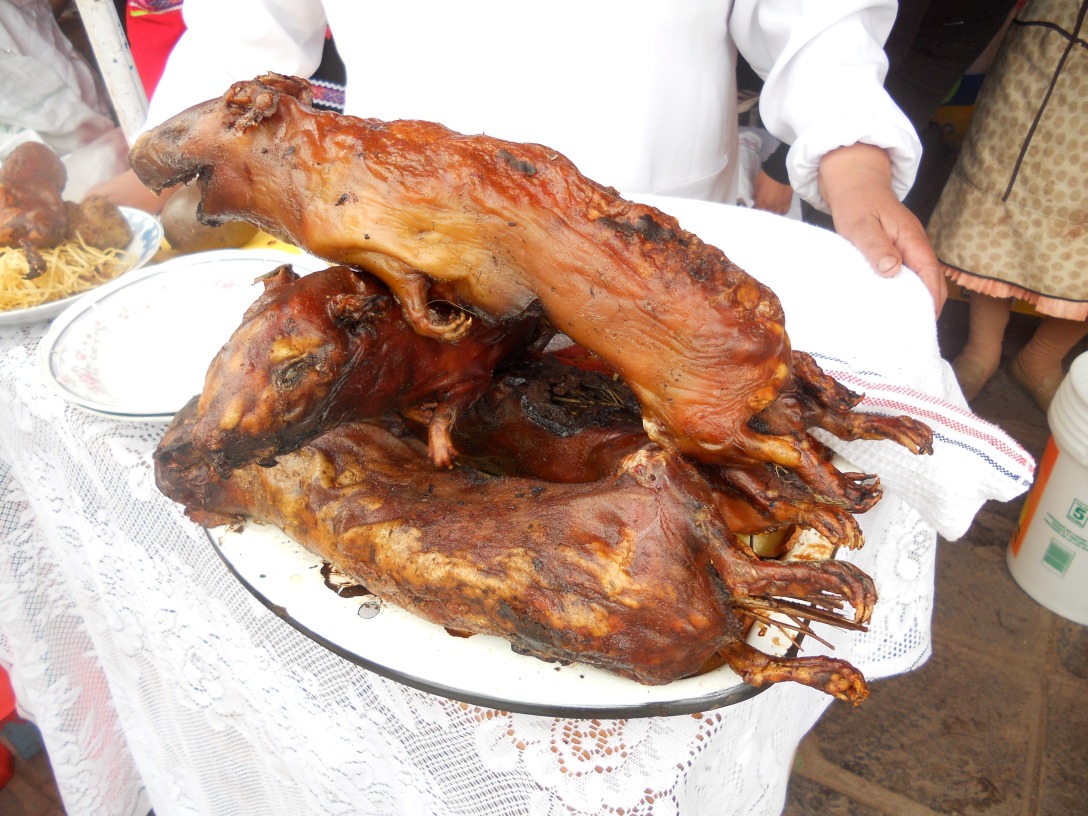