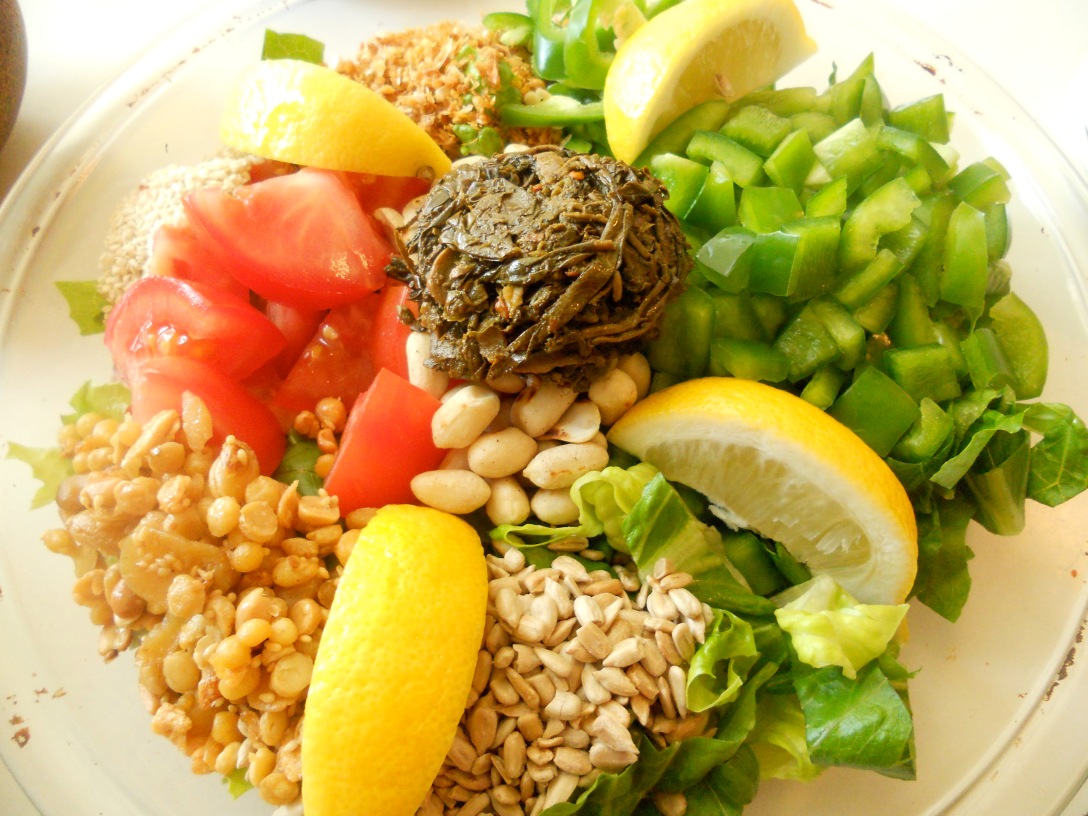 Last year, before heading out to the Bay area for some promotional events for my book, at least six different people gave me the same advice. I had arranged through friends to have my book party at a popular Burmese restaurant in Oakland called Burma Superstar, which also has several locations in SF proper. Upon hearing the name people said, “Oh, you have to try their tea leaf salad.”  Now if one or two people had dropped a dime, I would have thought nothing of it, but the hype machine created by six was certainly cause for a pause. It also, naturally, upped my expectations. ‘What could be so interesting about a salad?’ I thought, ‘Especially one made with tea leaves,’ which, last time I checked, tasted pretty bitter. Tea leaves are great for drinking and then, perhaps, composting, but making a meal out of them may be one for Andrew Zimmern.

Cut to the tail end of my book party at Burma Superstar. The place was packed, as expected, with a line out the door—and on a weeknight at that. The manager Tiyo, my friend’s sister, however, had reserved a table for myself and ten of my friends. She started sending out steaming plates from the kitchen in quick succession–curry pork with potatoes, chili lamb, sesame beef, mango shrimp, fiery tofu with vegetables, and rainbow salad–all of it unconditionally amazing. Much like it’s geographical location, Burmese food tastes somewhere between Indian and Chinese while retaining its own unique character. 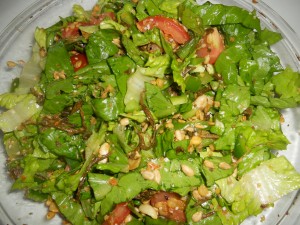 Then the tea leaf salad appeared, but, quite frankly, I was stuffed, and it didn’t seem to warrant all the hype. What I saw before me was just a bed of chopped romaine lettuce with some diced tomatoes and bell peppers, lemon wedges, a pile of peanuts and sunflower seeds, with a dollop of some dark paste, resembling pesto in the center. This latter ingredient was apparently the fermented tea leaves, known as laphet in Burmese. It’s actually a very popular ingredient there, precisely because of this dish. After the waiter artfully tossed the salad at the table, thoroughly mixing all the ingredients and squeezing some of the lemon juice over it, it looked just like any salad I could make at home. As satiated as I was, I had to try it, because as Flavor Flav said: “Don’t believe the hype!”

Very often, when trying something new, one looks for comparisons to something known or familiar, but after a taste of the tea leaf salad I was at a loss for words. Literally. The only thing I could do was grab another crunchy, savory bite– and another and another. The simplicity of ingredients masked the broad spectrum of flavors going on here—from salty to spicy to tangy. As for the tea leaves themselves, I couldn‘t quite put my finger on this new taste, but its umami was off the meter. Tea leaf salad is truly a dish you have to taste for yourself.

I never dreamed it would be so hard to recreate this dish at home, however. The only ingredient in question was the fermented tea leaves, but with the internet, everything is just a few clicks away.  Or so I thought. While looking for the elusive ingredient I found out some interesting things about fermented tea leaves along the way. First of all, they are not available in the U.S. due to a trade restriction against the banned chemical dye known as Auramine O, which some brands of the tea leaves are said to contain. Wow! What’s not to love about an illegal ingredient. Secondly, it supposedly takes 6 months to ferment the tea leaves, which are buried underground in vats. So much for making it myself. Finally, laphet  (meaning ‘pickled tea leaves’) thote (meaning ‘salad’) is not only one of the most popular dishes at Burma Superstar, but in the entire country of Myanmar itself! It is often eaten as a snack or at the end of a meal as a palate cleanser, and instead of romaine lettuce the Burmese use Napa cabbage and often ingredients like dried shrimp, green chilies, and fish sauce.

I did, in fact, procure authentic laphet via mail order, and was able to recreate almost exactly what I was served that night at Burma Superstar for the recipe below.  They are available through a Burmese store in London called Mum’s House (www.mumhouse.com), and come in small packets costing  £1.30 (about $2) each containing a small bag of laphet and a small bag of fried yellow split peas, manufactured by a company called Yuzana.

1.) Place all prepared ingredients on a serving plate. Squeeze with lemon and toss all the ingredients together until well mixed. 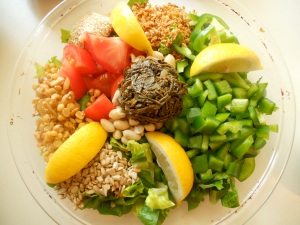